I was covering the last world cup in New Zealand and this meant a week in Auckland for both semifinals and then the last two games. But those were on weekends, this meant I had a whole week in between with nothing to do, so I decided to head home for a short break at my Mum’s place in Tauranga.

For those who don’t recall or aren’t from New Zealand, the biggest news behind the world cup was an environmental disaster called The Rena. A cargo ship, run aground and leaking tonnes of oil onto a white sand beach resort. In my head this was my beach.

While the rest of the country’s papers were headlined everyday with even the dullest of rugby stories, in Tauranga every front page was The Rena. When I arrived these were the stats on the front page…

…not tackles and metres gained.

Rugby is sport, and sport is, at it’s heart, just a form of entertainment. A diversion. This was people’s livelihoods, from tourism to fishing, not to mention the massive environmental impact.

I took a walk in the sunshine along the main section of the beach that had just been reopened and saw thick black patties of oil everywhere. the water looked sparkling and clear, but I was told the dispersant used kept the oil just below the surface so it was still there just harder to see.

The signs were clear: the main Mount beach was open, but the water was closed. This did not mean the beach was empty. The sun was shining for a time and there were quite a few tourists around and kids playing everywhere. Some rather clever person had written huge letters in the sand spelling out “Clean Me”.

It was surreal. Black everywhere. From the flags of All Black supporters to oil strewn beaches.

Four years later, the wreck is still there. The company that owns it has petitioned to leave it there, paying a few million dollars to leave the rotting ship on the seabed. “Four more years” takes a completely different meaning. 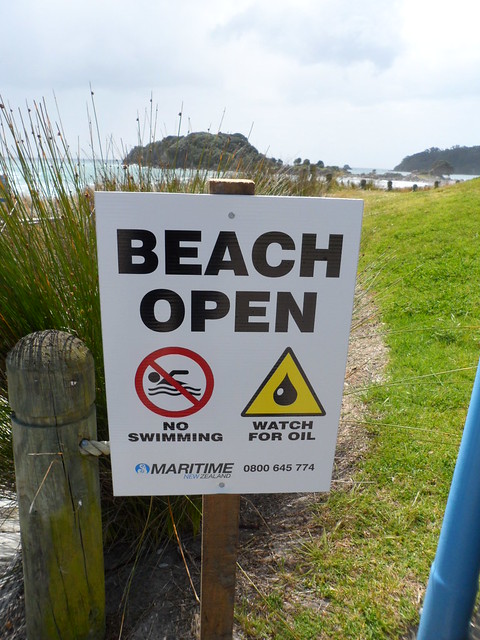 A classic moment in a classic game.

Though actually it would be another eight.

I think his first name was actually Bloody or something a bit stronger beginning with ‘F’ and ending with ‘Arken’.

A thorn in our side for years, but one of the finest players to have graced the game.

The only redeeming feature of the this match was that they went on to lose the final.

By a drop goal.

I think that would have been more humiliating than going out of their own tournament in the semi’s to us.

I’d been at the England v Aus game that afternoon (I’m Welsh) in Marseille and was on the ale in Avignon watching France beat New Zealand.

I made ‘friends’ with an Australian girl that evening that lived in the UK and made plans to go see her (so we could be um…. friendly again) at least once more.

Next day was Fiji v SA (I had tickets as I had hoped this was the QF that Wales would be in) and I put all such earthly distractions out of my head….quite far out of my head as it happens.

I get home and myself and the friendly Aussie girl exchange emails and she sends me a photo of her and I (and her mate) drunk as lords the evening we met, she is holding a bottle of wine and has a Green and Gold scarf round her neck.

So I email back to confirm my travel arrangements and comment that I hope she’ll have better dress sense when she comes to meet me as that scarf shouldn’t really been seen in decent company.

Her final email to me is to confirm she’ll see me at some pub at 7:30, she is looking forward to seeing me that night and by the way … ….

As it happens she saw the funny side and friended me to within an inch of my life that weekend.

The All Blacks and and Scotland are both in the quarter-final rounds this weekend. Back in 1999 they were facing each other, in a game that most people in New Zealand at least, don’t remember because of what happened the week after against the French.

The All Blacks featured Tana Umaga wearing 14, Marshall and Mehrtens at halfback and first-five, Norm Maxwell in his debut season wore the number 4 jersey, and as per the commentary “Reuben Thorne is the latest choice in the problem number 6 position”

Scotland appeared in arguably one of the uglier rugby strips of the 1999 RWC, and featured Gregor Townsend, Wellingtonian Martin Leslie at number 6, and the dual code legend Alan Tait – who’d made his union debut at the 1987 RWC.

“There. Sorry, but that was forward.”

Radio journalists, everywhere we go, we record what we call “buzz track” or “wild track”. It’s the sound you don’t notice – the dull roar of a crowd, traffic, the murmur of conversations or the shouts of a protest. It’s what gives life and context to the things we do, so we don’t sound like we’re sitting in a studio, when really we were recording the interview amid the machinery of a factory.

Back in 2007, I was a junior reporter, and so conscientious I left my microphone open for most of the second half of the All Blacks being dumped ignominiously out of the Rugby World Cup by France in Cardiff.

As I started to write my piece, buzz playing gently in my ears because I’d forgotten to pause the track, there was my own voice railing against Wayne Barnes’ failure to call that forward pass.

It had seemed like such a sweet gig. Early morning, some coffee, a croissant. I am pretty sure there was freshly squeezed orange juice, and if there wasn’t it wasn’t because my hosts, the Wellington Alliance Française weren’t extremely gracious.

On the other hand, I was likely a complete asshole. Supremely confident the All Blacks would walk all over Les Bleus, what seemed to me like “gentle mocking” was probably more like outright gloating. Which meant that the French kindness when we were losing was even more galling.

I remember sitting at the back of the room, head in hands, and a Kiwi photographer leaning over and telling me it would be OK. Not in a “life goes on, this too shall pass” way, but more “calm down love, it’s just rugby.” He spurred me out of my seat, to conduct my final interview.

It was that photographer I was talking to when I complained about that forward pass. Had I been watching at the pub with my friends, the language used would not have been suitable for broadcast, so silver linings?

Looking back now, that forward pass wasn’t what lost the All Blacks the match, but then, rather than blame the selection policy, the weird bias against dropkicks or the All Blacks just not being good enough, it made more sense to blame Barnes. After all, we were best in the world, weren’t we?

I am old enough that I vaguely remember 1987 but most of my memory involves being confused between rugby and soccer and getting into a fight with my brother that there had been Rugby World Cups before. I grew up around rugby, and rugby players, so the RWC was there for my whole life. By the time 1999 rolled around, I was watching in my pyjamas in a lecture hall at university. I was frustrated by the country’s obsession with the sport, so I was almost gleeful when France beat ‘us’ then, too.

Trudging back to work after the lovely French people had consoled me (and offered me baguettes to take back to the newsroom – an offer you can imagine I accepted with grace and dignity), I ran into a family walking up Lambton Quay. I asked if I could interview them for a vox pop, but it turned out they were Australian. “Oh, you’ll understand how I am feeling then,” I said.

One of them, a teenage girl, leaned close to me and said “Yeah, but we lost to England. You lost to France. That’s so much worse.”

Radio New Zealand’s rugby reporter Barry Guy was in Cardiff, and we struggled to get him on on air for a major bulletin after the game. Not because he was overly emotional, but because his hotel room didn’t have a phone or internet, so he had to do it from a payphone down the road. To add insult to injury he had to stay on for the final.

I asked him about it the other day, and his main memory was that all the French journos were really nice to him, saying how much they loved the All Blacks, and wanted them to be in the final. Les bastards.

Back in the newsroom, we hadn’t even really prepared for a loss. I turned my “sorry, but that was forward” grab into a package, and we got the the inevitable dissection of ‘what went wrong’. (Answer: sports.) I did about 10 live crosses to radio stations all over the world. (Possibly just to reassure them that the country wasn’t literally on fire.)

The All Blacks have said this week they’re not thinking about revenge, and let’s face it, we got that at Eden Park in 2011. But if they were to just make doubly sure that the demons of 2007 were well exorcised this weekend [Ed note: and they CERTAINLY did!], there is a bunch of us who wouldn’t complain.